Here at the Food Partnership we are very sorry to say goodbye to one of our most active and passionate volunteers. 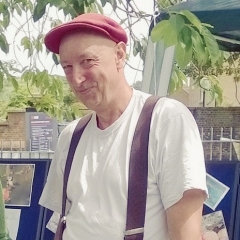 Neil Smith who passed away after a long fight with cancer on Sunday June 11 will best be remembered by us for his dedicated work getting Racehill Community Orchard off the ground.  However he was also involved in Brighton & Hove Organic Gardening Group since its early days until a few years ago, working on the plot and on the gardening committee.

“He was a great gardener and a good trouper, he was always doing hard work to support others” said Alan Smith, BHOGG.

Neil lived on the top of Whitehawk in a self-build house that he built with other people in the local community.  When he found out we were proposing to plant a 200 hundred tree orchard with Brighton Permaculture Trust on his back doorstep he was overjoyed and one of the first volunteers to sign-up.  He quickly joined the Racehill Orchard organising committee and became instrumental to the group.  He was probably involved in planting almost all of the trees on the Racehill site including thousands of edible shelter belt varieties.  He started off as a volunteer but quickly moved up to a paid session-leader, even though he still put in hours of volunteer work behind the scenes to make things happen.  He was always welcoming to people on site to put them at ease, show them the ropes and enthuse them with his love for nature and the orchard.

Whilst volunteering for the orchard he also volunteered as a resident director on the Due East Neighbourhood Council, in their environment group and for Friends of Sheepcote Valley.   He also did a lot of volunteer work at Whitehawk Inn and the Brunswick Festival.  There are probably many other places he volunteered but these are just the ones I am aware of.

A friend who loved to chat

Over the years working with Neil I got to know him very well and considered him a great friend.  Boy did he love to talk – we probably used to chat for at least an hour a week on the phone.  One of the things I loved about him was his attitude to life.  He was quite open about the alcohol and drug problems he had in the past but had conquered with a great strength of mind.  It was one of the things which made him approachable as a session leader. He himself had had issues and changed his life; this made him a great role model for other people.

When he found out he had cancer he applied the same strength of mind to it; using every tool in his box to battle it, but with great grace and dignity.   Right up until the end he was chirpy, positive and had a lot of joy for life.  Only a few weeks ago we were up at the orchard looking out over the trees and he said he felt like he had achieved everything that he had ever wanted in his life.

“It’s important to me that we give opportunities for people to be active and connect with nature and other people. One of the great things about getting involved a project like this is you generally meet with good people so the more volunteering you do, you make yourself a nice world with nice people in it, that’s healing in itself for me.”  Neil Smith, Dec 2013

He was a beautiful person who has left such a legacy in the orchard and the lives of the people he touched.  He will be sorely missed and remembered with great fondness as one of those good people making the world a nicer place.

Kirsty Sloman, a good friend of Neil who also volunteers at Racehill Orchard has written a lovely blog here