When it comes to making commitments, these organisations are not running scared. 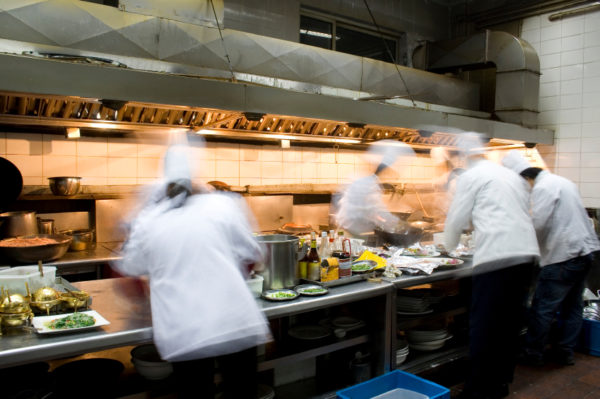 Caterers and chefs from some of the biggest organisations across the city recently came together and made a range of bold commitments to ensure the food they serve is as healthy as possible in the future.

Project Manager, Chloe Clarke organised the healthier catering workshop where the commitments were pledged: “We are delighted NHS Trusts, universities, schools, colleges, workplaces, leisure facilities and major venues from across the city are all involved. These organisations collectively serve over 1.4 million meals a month, so their decisions to improve the food they offer will have a major impact on the lives of many residents.”

“That is exactly why we established the Good Food Procurement Group, to create real and lasting change. We would like to congratulate all those organisations who have made such positive commitments towards healthy catering.”

These organisations are leading the way in healthier catering across the city.

The Food Partnership has joined forces with Brighton & Hove City Council and Jamie Oliver’s Food Foundation to run the city-wide Sugar Smart campaign which aims to raise awareness and reduce the amount of sugar consumed. One of the actions organisations can choose to take is to apply a 10p levy onto any sugary drink they serve. This money raised then typically goes into the central Children’s Health Fund.

The University of Brighton has again shown that they are leading the way by being the first university in the country to become ‘Sugar Smart’ and have committed to introducing the sugar levy across their campuses from August 2016. Any funds raised will go back into cookery sessions and food education for their students.

Following the workshop, Legal & General (catered by Lusso) are also looking into this for one of their sites. Sussex County Cricket Club has already introduced a 20p levy on sugary drinks sold with funds raised going to the Sussex Cricket Foundation.

Eden Foodservice provides catering for all 64 primary schools across the city. After recalibrating recipes and removing drizzles and icings, their desserts now contain 40% less sugar, have increased fibre (25% wholemeal flour) and are only served in appropriate portion sizes [1].

At the workshop, Legal & General committed to reducing unhealthy snacks and the i360 (catered by Heritage Portfolio) will ensure a selection of low/sugar-free cakes are served in their tearoom too.

Jo Ralling, Campaign Director, Jamie Oliver’s Food Foundation said: “The Healthier Catering Workshop was a fantastic day and attended by some of the biggest caterers across the city. It was hugely encouraging to see so many of the big boys engaging and making commitments to reduce the sugar content in the food and drinks they serve.

“Progress like this will make our Sugar Smart campaign result in long term behaviour change and the people of Brighton and Hove living longer and healthier lives.”

Vending machines are typically full of high fat and high sugar products. This can be a particular cause for concern where vending is the only food on offer such as staff working night-shifts.

Brighton & Sussex University Hospitals NHS Trust (BSUH – responsible for the Royal Sussex County Hospital), Freedom Leisure (not-for-profit trust responsible for seven leisure facilities across the city), the University of Brighton and BHASVIC (Brighton Hove & Sussex Sixth Form College) are all committed to reviewing and revising the vending they offer. The Food Partnership, Brighton & Hove City Council and Jamie Oliver’s Food Foundation are working collaboratively to ensure any guidance developed around healthy vending is shared city-wide to benefit as many other organisations as possible.

The Healthy Choice Award is a joint initiative between Brighton & Hove City Council and the Food Partnership. Achieving an award demonstrates that an organisation is committed to preparing, cooking and serving meals in a healthy way. Legal & General (catered by Lusso), University of Brighton, BHASVIC, BSUH and Freedom Leisure have all now committed to applying for a Healthy Choice Award in the future. This is fantastic news. They will join other organisations in the city committed to offering healthier catering, including Bupa (catered by Baxter Storey). They achieved the award in 2015 as they have highly visible nutritional information on menus as well as a ‘less than’ 350 calories range making it easy for staff to make a healthy choice. There’s also the added bonus of free fresh fruit and a make-your-own fresh vegetable or fruit smoothies for only £1.

These are just a few of the examples of all the great work already going on in the city.

Why is this all so important?

Around half of the population of Brighton & Hove is above a healthy weight. Shockingly one in four children are overweight or obese by the time they leave primary school, with obesity being twice as prevalent in the most deprived areas of the city. It is thought sugar plays a key role in this, as we are consuming up to three times the amount we should. The annual direct cost of obesity to the NHS in Brighton and Hove is estimated to be upwards of £80 million pounds. There are additional consequences of high sugar intake; approximately 300 children in the city are admitted to hospital each year for dental surgery. So it’s a huge health issue and a huge economic issue for our city.

The workshop was part of a series of events for the Good Food Procurement Group, which was established in 2012 by the Food Partnership and meets twice a year on a range of key topics to do with sustainable and healthy food. To find out more about the group read this case study.

Harriet Knights, Healthy Catering Project Officer, Brighton & Hove City Council: “It’s great so many caterers pledged to apply for the scheme and join the 60+ outlets across the city that have achieved the Award or have made Healthy Choice Commitments. With more meals than ever being eaten outside the home, caterers can make a huge difference in supporting Brighton & Hove residents to maintain a healthy diet. We were thrilled to support this event and look forward to working with members of the Good Food Procurement Group going forward. ”

Find out more about the Healthy Choice Award for caterers, cafes & restaurants and for early years providers, breakfast clubs and care homes.

Read more about what the Sugar Smart campaign is achieving locally and nationally.