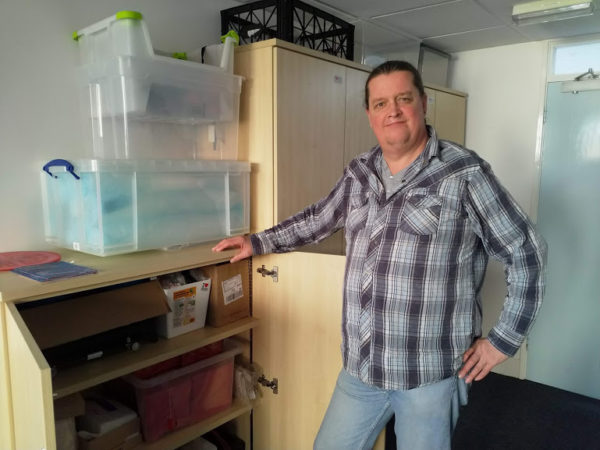 Dave Bebb is our latest Food Hero. As one of the Food Partnership’s longest-standing volunteers, we think there’s no better person than him to take the first Food Hero award of 2019.

Dave has been volunteering with the Food Partnership since 2014. Vic Borrill, Food Partnership Director, paid tribute to his dedication and hard work: “Dave works quietly behind the scenes to make sure our events are well-organised, our cupboards are tidy and our kitchen is well-stocked. He is a reliable member of the team and is an important part of the Surplus Food Network.”

But it’s not just the practical help that Dave supports the Partnership with that has impressed the team here.

As Emily O’Brien, Policy and Partnership Manager, explained: “Dave is unafraid to go into the basement, our slightly chaotic storage area. That makes him a hero beyond all heroes.

“His encyclopaedic knowledge of 1980s music is pretty impressive too!”

And we’re not the only local organisation to benefit from Dave’s commitment and enthusiasm in the food sector. Before joining the Partnership, he was a volunteer at Fork and Dig It, and in 2015 he joined the Real Junk Food Project team. He has also worked at Fareshare and the Food Waste Collective.

We think his extensive range of voluntary support for so many Brighton organisations is truly commendable.

Emily, the coordinator of the Veg Share Scheme at Fork and Dig It, said: “Dave was a fabulously reliable volunteer. He was also known as The Master of the Pizza Oven. The oven was a tricky beast to handle and it often left him looking just about as stressed, hot and bothered as a margarita.”

The motivation for all of Dave’s amazing voluntary work is fuelled by his frustrations that so many people just don’t know how to cook for themselves and that food is often an afterthought for them. For him, places such as Italy, where food is a central and integral part of the culture and of everyone’s daily lives, have got things right.

He said: “Too many people don’t have the right information about food, they don’t know how to make the right decisions about food. I guess that’s what motivates me to keep volunteering at the Food Partnership. It teaches people positive food messages. This is something that’s very close to my heart.”

Dave’s first foray into the Food Partnership was volunteering for a Fridge SOS exhibit at the Food and Drink Festival. This was to promote reducing food waste and fighting food waste is a passion of his.

Dave’s mission is to inspire people to make positive changes to the way they treat food in their own lives. He still makes sure he regularly gets down to the Real Junk Food Project’s Food Hub in Bevendean.

Some of Dave’s best memories at the Food Partnership include being involved with:

Dave says he has been passionate about food from the get-go. But it was when he moved from Hove to Bristol for university and became a vegetarian that he really started to teach himself how to cook.

He likes to make sure he is cooking and eating a variety of different foods – something he says is a necessity as a vegetarian to prevent falling into a boring food rut. His favourite food: a vegetarian shepherd’s pie.

In December, Dave attended a meat-free Christmas cooking class at the Community Kitchen, and his family benefited from a celebration plait with a delicious nutty filling for Christmas dinner.

We would like to wish Dave, a true Food Hero, a very Happy New Year and we wish him well with his volunteering for many years to come!

Volunteers are essential to our work and ensuring that participants in  our projects and activities have a great experience.