Posted on December 11, 2020 by Caroline Whiteman

2020 is a year no one is likely to forget in a hurry. A time when loss is ever present for many and a re-evalution of what we most deeply care about rose to the surface in each of us.

There are a plethora of images associated with the early days of the crisis: empty shelves in supermarkets, clapping for carers, face masks, social media posts about sourdough, zooms… the list goes on. But as the initial panic subsided, a different narrative began to emerge, one that spoke of purpose and optimism.

When I asked friends how they were doing during lockdown #1 a response I heard a lot was ‘I’m so grateful for my allotment/balcony/garden’ and ‘gardening has really helped me through this’. This was reflected in the media with stories of a surge in interest in grow your own. A reaction to the prospect of scarcity of imported fruit and veg maybe? And yet more than just that. 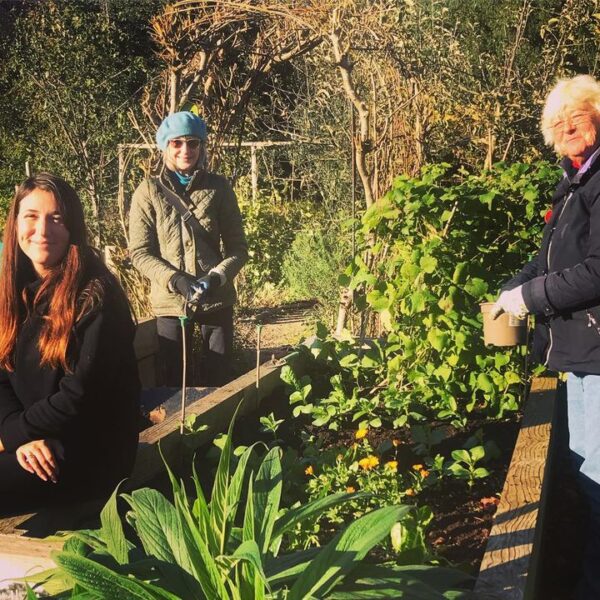 Gardeners on our Good to Grow course

This new and renewed sense of appreciation of being outside and growing plants came as no surprise. We at the Food Partnership have long advocated the mental and physical wellbeing benefits of gardening, to the point of it becoming widely accepted in health care provision.

Whilst many folk were considering how they might get into (or back into) growing their own food, the Food Partnership were at the heart of the emergency food response in Brighton and Hove. Suddenly an alternative set of images began to filter through – volunteers packing eggs for food parcels, delivery drivers giving up their time to get food to the most vulnerable in our community, fresh community garden produce being dropped off at hubs, and a determined band of gardeners around the city growing food like peoples’ lives depended on it.

Pre-Covid we knew that gardening and food growing represented a cornerstone of wellbeing for many, whether that be the most committed allotmenteer or a new participant at one of the many community gardens this city is blessed with. But as the significance of what we were facing started to reveal itself there was a shift in the relationship with our precious growing spaces. Along with the many emails offering help with the emergency food response we saw an uptick in those wanting the get outside and develop their skills around growing food. Compost became a much sought after commodity and those already involved in community gardens became more determined than ever to continue in spite of shifting restrictions. 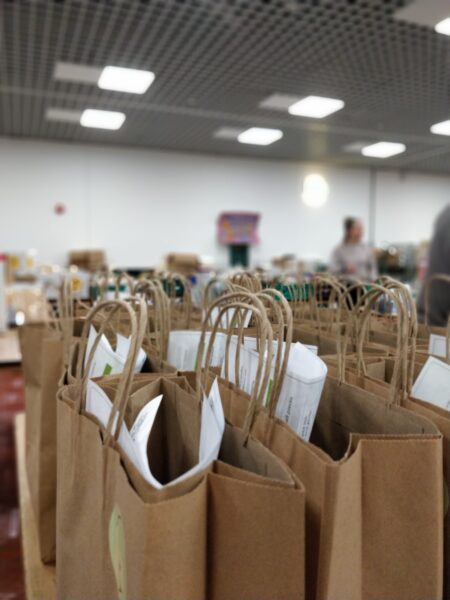 Food parcels at our distribution hub

From early spring, gardening sessions at our flagship Demo Garden in Preston Park became infused with purpose. We were inspired to cultivate and harvest the freshest produce imaginable for the volunteers themselves but also for the food parcels that were going out to the increasing number of people experiencing food poverty. As a group, our awareness of the importance of urban food growing as part of a resilient food system increased as we packed up boxes of greens, herbs and the best of our seasonal harvest. We teamed up with a Stanford and Cleveland community garden a pull together boxes of exceptional quality produce worthy of a veg box ad campaign.

People waiting to collect parcels were interested and intrigued by the contents as I delivered them to the Brighton Table Tennis Club’s food hub. ‘How can I use that?’ one lady asked about the bunches of African kale. We had a good chat about how versatile it is (shredded in coleslaw, soup or stirfry, steamed or roasted in case you’re interested) and she seemed pleased to try a new vegetable in her parcel. On some days the produce went straight into the hands of the chefs of the Real Junk Food Project to be transformed into nutritious and vital take away meals for their hub users. 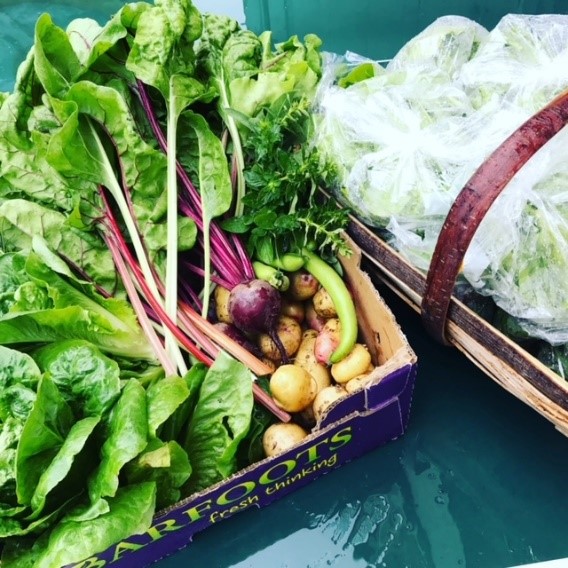 Other projects across the city were similarly donating produce to the effort as Nuture through Nature continued their amazing work to supply the food banks, Saunders edible park were able to supply the kitchen at The Bevy with fresh ingredients for some of their meals, and over at the Weald Allotments produce was turned into soup to be shared with many in their community, to mention just a few.

In the gardens themselves, volunteers told us that being involved gave them a sense of belonging at a time of isolation and disconnection, and a place to be when so many of their regular options for social contact were unavailable. Speaking personally, sinking my hands into the soil to transplant plants that would become food grounded me and bought me into the present moment when at time the relentless news cycle could feel overwhelming. In the Demo Garden we noticed more wildlife and took time to appreciate the freshness of the air and scents of the seasons.

As we enter the next phase of this extraordinary time and the seasons shift and the gardens start to wind down over winter, there is a time for reflection. The gardens will stir again in early spring. New courses will run, new volunteers will find their way to the groups that fill them and more food will be grown and shared among us. The appreciation of these precious resources is alive in those that tend and eat the food, as one young student who walked past our the Demo Garden said it best: ‘this garden and seeing you all working in it gives me hope.’

If you are interested in community gardens do check out our directory and although many won’t be able to accept new volunteers now, these spaces will be there after lockdown and keen to welcome new volunteers when they are able to do so.

Community gardener Caroline Whiteman writes about the dementia gardening visits that have paired volunteers with local residents to cultivate gardens as well as friendships.

This project aims to produce sustainable and locally grown organic flowers and plants as an alternative to the mainstream floristry industry.

Get outside and do something fun, inspiring and interactive outside of your regular working environment.