“From obesity and diet-related ill-health, to food poverty and waste, climate change and biodiversity loss to social isolation, food is not only at the heart of some of our greatest problems but is also a vital part of the solution.” ~ Vic Borrill, Director at Brighton and Hove Food Partnership

The food system is a complicated beast.  It is becoming increasingly difficult to work in one area of food, for example catering, without needing to be aware of factors such as the importance of product sourcing, reducing waste, food education and health.

Local food projects are no different. Whether you set up a project to tackle food poverty or to grow seasonally, the likelihood is you’ll be reaching far beyond the topic of food and addressing some key societal needs.  “In practice ‘food projects’ are about more than just food.” ~ Joseph Rowntree Foundation

The Real Junk Food Project is a shining example of why a local food project is about much more than just food – read on for heartwarming stories about the chef and volunteers at their St Luke’s Church weekly cafe. 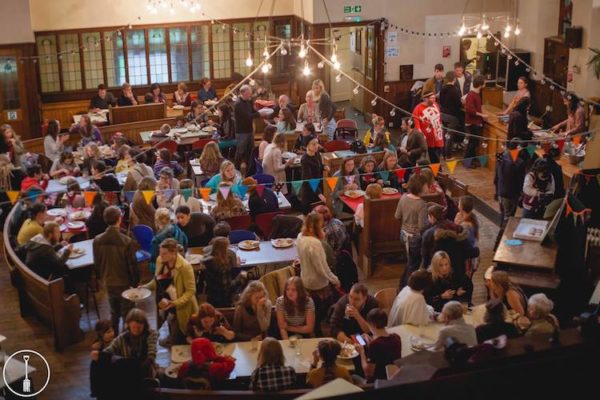 The Real Junk Food Project Brighton (RJFP) is part of an international movement of cafes and pop-ups that intercepts food waste and uses it to feed people who need it. In the UK, almost three quarters (70%) of food thrown away could have been eaten (see WRAP data), yet as many as 8.5 million UK residents struggle to get enough food to eat.

The RJFP Brighton redirects surplus food from shops and restaurants to one of its pop-up cafes or food hub which run from Tuesday to Friday around the City. On Fridays at One Church, there is often a queue down the street and as many as 200 people are served in just half an hour.

The meals are sold on a ‘pay as you feel’ basis, meaning healthy food is financially accessible for anybody in the city. For those who have the luxury, it is a chance to pause and think about the value a hot, healthy meal holds for them.

Arriving at the St Luke’s Real Junk Food Project at the end of service one Tuesday, as the dedicated team of volunteers cleaned up and the last few customers peeled themselves away from their conversations, was a heart-warming experience. 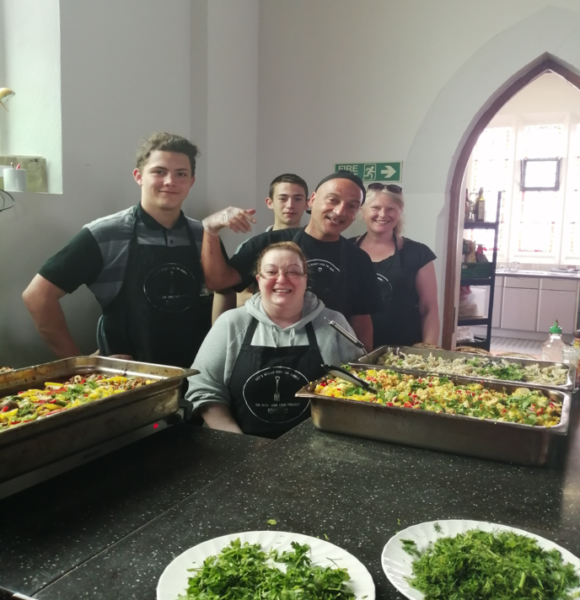 Head Chef, Daniel Shindler, previously an inner-city schoolteacher in London for 33 years, started at the RJFP as a volunteer and learnt how to cook through simply watching and enthusiasm.  He explained of his joy at finding a job that aligned his previous experience with his core values. He now describes himself as an ethical cook working at other places such as the Purple People Kitchen Food Bank in Portslade.  Linking a chef to a schoolteacher was a far stretch for my imagination but as Daniel shared with me his approach to working with the many RJFP volunteers, I started to get the idea.

Daniel receives volunteers through MESH (the Migrant and ESOL Support Hub) who work with Voices in Exile. This gives often highly-skilled refugees, asylum seekers and vulnerable migrants with no recourse to public funds in Sussex and Surrey an opportunity to develop their English as well as gain kitchen experience. The experience and skills they gain can be a bridge into employment. Daniel told me that just this week a woman started volunteering with him who had previously been an experienced baker in Iran, and she is keen to make desserts for the cafe.

Volunteers also arrive from young offenders and Brighton and Hove’s adolescent services, as well as clients referred to him by an NHS occupational therapist at the Specialist Recovery and Support Service. One of these clients who initially found it hard to communicate now is a very friendly, popular and regular member of the team. Brighton and Hove Supported Employment Team and Unsigned UK, who offer traineeships and paid work placement programmes for 16-19 year olds, have referred young adults who have since been successfully placed into paid employment. One young person, who had been homeless, got a job at a popular pizza restaurant in town as a waiter and was promptly moved into the kitchen once they realised his skills.

“‘Without doubt the time spent volunteering is part of a bigger picture where vulnerable people of all ages and backgrounds just need a space of safety, stability and nurture to help them find themselves” says Daniel, who claims that an important lesson he maintains from his teaching practice is that “process is everything”.

Daniel has gone way beyond his remit as a chef and created a structured volunteering programme with a series of phases. Phase one involves the referred volunteer to be initially accompanied by a mentor. “In this period we create a safe space in which we build trust so the volunteer feels supported. There’s lots of laughter, kindness, generosity and music” he says.

“Building a team of empowered volunteers is no different from creating a drama ensemble with inner city young people. I get told sometimes that certain volunteers will need regular rest or they might struggle with timekeeping or commitment but I find that with the right support and an interesting role, they are engaged enough to want to carry on” explains Daniel, evidenced by a number of success stories from his time in the role.

At the end of the first phase Daniel will have a conversation with the volunteer about what they want from the placement. “It might be their ‘wants’ are around gaining kitchen skills but they’re often about their own well-being such as gaining confidence talking to people they don’t know or taking initiative” he says.  “I will also share my ‘wants’ such as resilience which includes finishing the shift right through to the end including the pack down or asking if something is not clear. This can be formalised in a document or can remain an informal agreement”.

Daniel helps the volunteers create a portfolio of pictures and achievements as well as writing the volunteers references for a range of different audiences such as job interviews or further courses.

He was keen to recommend a book he has written which is soon to be published, ‘In Search: Reimagining What it Means to be a Teacher’ as it explains in depth his approach to supporting people who often lead challenging lives. He has taken this wealth of experience and transferred it into supporting his volunteers.

A meeting place for all

Speaking with some of the volunteers I learnt how much this project brings to people’s lives. One revealed the joy she gets from speaking to people from all walks of life and another claimed that without projects such as the RJFP, as an introvert, she wouldn’t speak to anyone for days.  A third shared how her confidence had improved since joining and she has since been offered a paid job in a care home.

There was one thing that every single person I spoke to mentioned that day; that the RJFP is a place of non-judgement. Whether you are a customer, a volunteer or a member of staff, it is a place where everyone feels welcome. Not only does this project address waste, health and food poverty, it helps tackle social isolation, builds skills and confidence, supports people towards employment and gives people a sense of acceptance and belonging.

The Real Junk Food Project is a shining example of why a local food project is about so much more than just food.

The Real Junk Food Project is a member of the Surplus Food Network, an alliance of organisations tackling waste by working with suppliers to distribute surplus food to people in need, in Brighton and Hove and the surrounding areas.


If you’d like to help support the work of the Real Junk Food Project, we’re currently calling all growers to ‘grown an extra row’ of produce for RJFP on their allotment or veg patch. Find out more.