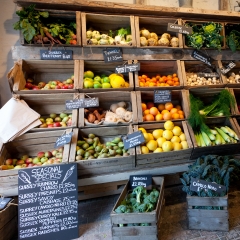 We are excited to be making a joint pledge with Brighton & Hove City Council to make it easier for everyone to eat more veg as part of the national Peas Please campaign.

We pledge to become a pioneer Veg City. It sounds good but what does this actually mean? These are some of the actions that our city has committed to so far:

On Tuesday 24 October at The Vegetable Summit, a national conference in London organised by healthy eating charity the Food Foundation, Deputy Council Leader Gill Mitchell and Vic Borrill, Director of the Food Partnership will make the pledge on behalf of residents.

Cllr Mitchell said; “We are extremely proud to be making this commitment to become a ‘Veg City’ and encourage everyone in Brighton & Hove to include more vegetables in their meals.

“From our very youngest children in nurseries and schools, to the owners of our many cafes and restaurants and major food producers and suppliers, and developers delivering landscaping that could include edible planting, we will work with Brighton & Hove Food Partnership and others in the city to explore exciting and innovative ways to improve access to fresh good healthy food.

“Embedding ‘Veg City’ in the heart of our five year food strategy will also build on the success of our Sugar Smart campaign and further improve the health of our residents.”

The national campaign, which will run for the next three years, aims to change how people eat at home and in restaurants or catered environments by encouraging extra portions of vegetables to be included in meals. Other ideas include asking food manufacturers to include more veg in their products such as having bigger vegetable portions in ready-meals and launching an ad campaign aimed at making veggies appealing to children.

Brighton and Hove will be one of only a handful of cities pledging to become a pioneer Veg City so will be presented as ‘trailblazers’. Our Primary School Meals Service that provides lunch for every primary school in Brighton & Hove will lead the way, committing to increase consumption of vegetables by the children, rather than just increasing the number of portions of vegetables available, with a target to reduce food waste. They will also be trialling raw veg as well as cooked on the new menu.

About the Peas Please campaign

The Food Foundation conducted a wide-ranging consultation with over 150 organisations including farmers, retailers, fast food and restaurant chains, caterers, processors, civil society organisations and government departments to identify the food system challenges to veg consumption and find ways in which these barriers can be overcome.

The Peas Please campaign is about getting people in the UK to eat more veg. Initiatives such as 5-a-day have had little impact on veg consumption and consumer behaviour change so Peas Please aims to change the food system to support consumers to make healthier choices.

Veg Cities are those where the city or local authority, in partnership with the private sector and community organisations use their powers to drive up vegetable consumption.

Organisations and individuals can sign up to the Peas Please Pledge:

“We pledge to play our part to help everyone in Britain to eat an extra portion of veg per day.”

If you would like your organisation to be part of the Veg City initiative or would like to find out more information please contact Chloe Clarke on 01273 431 700 or email chloe@bhfood.org.uk.

Vegetables are the star of a new TV advertising campaign hoping to capture the imagination of 7-13 year olds and encourage a love of veg.