Two Sussex-based surplus food projects work together to save half a tonne of sweet cherries.

Our guest blog comes from Beth Parry, Fundraising & Communications Manager at FareShare Sussex, with added stories from Phil Holtam, Sussex Gleaning Network Coordinator. They share the journey of beautiful cherries from farm to fork, harvested by teams of Gleaning volunteers at a farm near Eastbourne, and distributed by FareShare to charities across East and West Sussex.

The Food Partnership is all about connecting through food, and we put this into practice through the networks we support. One of these is the Surplus Food Network, which brings together organisations that intercept and distribute surplus food to charities and individuals across our city and beyond. 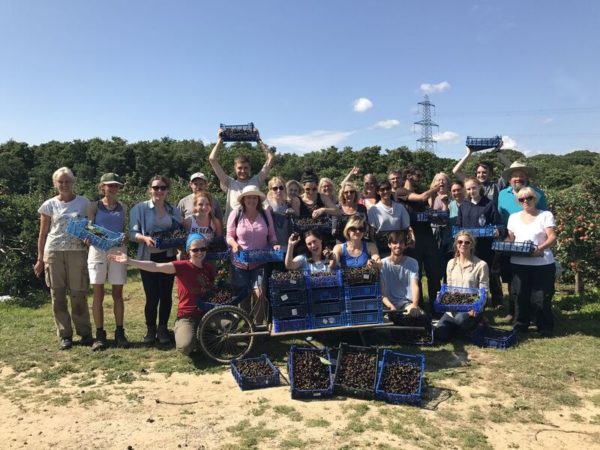 Over the past year in Sussex, volunteers have gleaned over 20 tonnes of produce that would have otherwise gone to waste, including apples, pears, sweetcorn, spinach and, most recently, cherries.

In July 2017, a team of 28 volunteers headed out into the sunny Sussex countryside to rescue a crop of cherries from Greenway Fruit Farm near Eastbourne. Led by Phil Holtam, the Sussex Gleaning Network Coordinator, the group managed to save over 500kg of cherries that had ripened early, about 90 crates. The farm had chosen its cherry varieties to be picked in sequence, but due to warm weather in May and June, the later varieties arrived early. This couldn’t have been done without the help of the wonderful volunteers, who gave up their day to come gleaning. 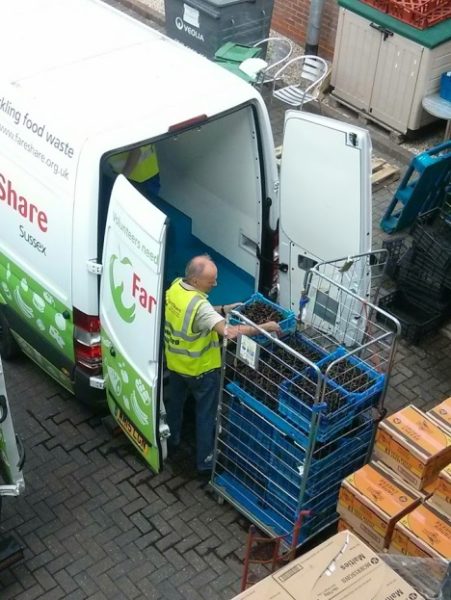 We followed the cherries along their journey from the farm to those in need. After being gleaned by the enthusiastic Gleaning Network volunteers they were picked up by our volunteers in the FareShare van. The cherries were brought back to our depot for storage before they were then distributed across Sussex on our delivery routes. The Brighton Table Tennis Club enjoyed the snack while playing down on Brighton beach, while the Clock Tower Sanctuary – which supports homeless young people – offered them out to those using the centre as a treat. On the weekly route to Crawley the FareShare van delivered some to Crawley Community Church, who made a fabulous chocolate and cherry gateau.

Although the recent cherry glean (and previous gleans) was great news for FareShare’s charity members, it can be devastating for the farmers involved. Phil explained more: “Food goes to waste in agriculture for a variety of reasons – no two farms are the same! In some cases there are issues in the supply chain, where an expected order falls through due to the irresponsible buying practices by big retailers. Or, if a pest or weather event has damaged the crop, a farmer may view the value of the (still edible) fruit or vegetable as lower than the cost of harvesting. There are also instances when an unpredictable spell of weather leads to crops ripening ahead or behind schedule, leading to a glut in supply. Then there is also the principle that many farmers refer to – in their precarious line of work, it’s better to have too much produce than too little.”

Graham Love, the farmer at Greenway Fruit Farm, told us:
“It’s a great thing to be able to share nature’s wonderful abundance with those who need it.” 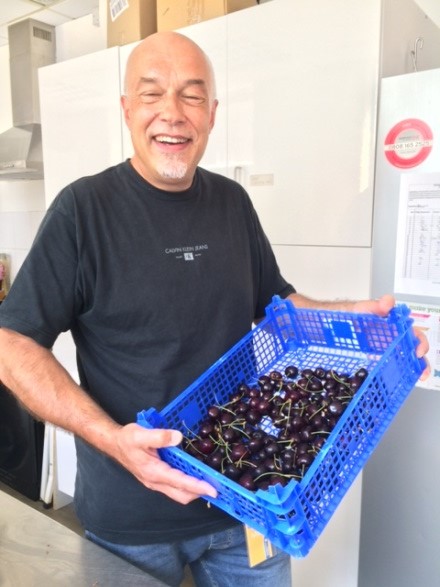 If this blog has inspired you to get involved, then sign up to the Gleaning Network to be notified of gleans in your local area. Anybody and everybody is welcome to get involved in a gleaning day! You can also get involved with FareShare Sussex as a volunteer driver, warehouse assistant or office assistant.

The Gleaning Network is a campaign by Feedback– an environmental organisation that campaigns to end food waste on every level of the food system.

FareShare Sussex is a charity project that redistributes good surplus food from our busy warehouse in Moulsecoomb, Brighton, to a range of different charities and community groups across East and West Sussex.

< Our Ethical Gift Guide for the holidaysIn memory of Bob >

Ruth Anslow from HISBE shares the challenges of a small food business during the coronavirus pandemic, their good news and their ‘Back to Better’ campaign.

Halloween might be a bit different this year, so we’ve got a couple of fun kids baking activities to try this half term at home.

Families trying to live on £8.53 per person per week

Families and people who are disabled or with long-term health conditions are more likely to be in food poverty, according to our new research.