By this late stage in 2020, there seems to be a growing consensus that connection with others and with nature is what will see us through tough times. It’s been a year when many have realised that the little things in life are really the big things, and the simple joy of community compost is a perfect embodiment of that.

Run in partnership with Brighton and Hove City Council (BHCC), community composting offers a solution for those who want to compost but lack the space at their home. It’s an incredibly popular initiative which means the vast majority of the 40 schemes citywide have waiting lists. Although our work on setting up new schemes had to pause due to the pandemic, there has still been plenty of development.

You might not think that inviting a bunch of neighbours, quite often strangers, to share and look after something as simple as some compost bins could lead to all sorts of meaningful connections, but somehow it does. It’s laden with the potential for metaphors – seeds aren’t the only surprising things that grow from compost! And there is a magic in how it turns an ordinarily mundane domestic task into something of greater consequence.

Composting: THE social activity during times of Covid

The bane of many house-sharing scenarios – taking the bins out – has been known to leave many the frustrated housemate squabbling over who did it last time. Replace your general rubbish bin with a compost caddy however, and the task is turned on its head.

Sarah, compost monitor at the Dyke Road Park community compost scheme, found that in her house, “taking the compost to the bin became a treat during the strict lockdown in March-April. We ‘fought’ over it like families with dogs all wanting to take them for walks!”. 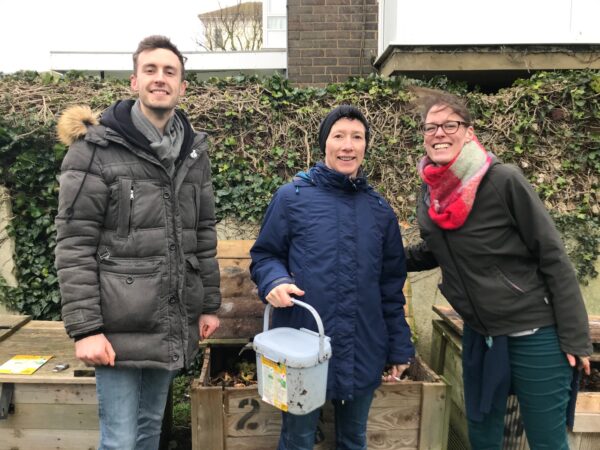 Unlike a traditional trip to the bins, depositing food waste at a community compost scheme often provides a valuable window for social connection that was much sought-after in those lockdown months. The majority of schemes are located in public spaces and monitors regularly say that even as they’re turning the compost at their scheme, strangers often stop as they’re passing to make conversation and offer a positive comment about the project.

Svenja, who monitors the Saunders Park scheme, finds that the role gives her the chance to swap ideas around environmentalism with her members: “I’ve had great conversations with new compost members regarding the environmental impact we’re having on the planet and we started sharing other useful resources to help each other be greener.

“It is wonderful to see how many people are so keen on making a large contribution to the reduction of carbon emissions and putting the generated compost to good use in the community garden at Saunders which is much used by the local community” adds Svenja.

Broadly speaking, composters tend to be keen environmentalists. Being part of a community compost scheme provides the opportunity to exchange tips on being green. At St Nicholas Rest Garden Community Compost Scheme (St Nick’s), monitors Gabby and Gregg started a WhatsApp group in August for members to communicate quickly and easily. “It seems to have been received really well” says Gabby, “and it’s a nice opportunity to share articles and ideas relating to composting”.

Ensuring that the scheme at St Nick’s continues to run smoothly gave Gabby and Gregg the opportunity to meet up outdoors several times throughout the summer to talk worms and admin: “We had some lovely times up at the St Nick’s bins over lockdown. Despite all the difficulty of this time, it’s felt like a real joy to be at the bins through it all”.

Lockdown exposed a lot of harsh truths about the poverty and inequalities that exist in our city. Naturally, the focus of the Food Partnership’s work throughout the lockdown was very much on the city’s emergency food response to the pandemic, and it’s amazing how keeping compost ticking over in the background was quite literally grounding when things seemed a little overwhelming.

Our amazing contractor Tim, who designs, builds and maintains all of the community compost bins across the city, was certainly kept busy. With his help, we changed the codes at 8 schemes, helping us to get up-to date numbers on usage, which in turn meant that people who had been on the waiting lists for some time finally got to be inducted in to their local scheme.

“It’s been so nice to see members and have a chat and meaningful contact at a time when we’ve all been mainly at home not seeing people or familiar faces – so  good for mental health!”

With new schemes on hold, we focused instead on increasing capacity at existing schemes. Almost 20 of Tim’s new ‘super-sized’ bins were installed at community compost locations around the city. In May, one of these was happily welcomed at Saunders Park: 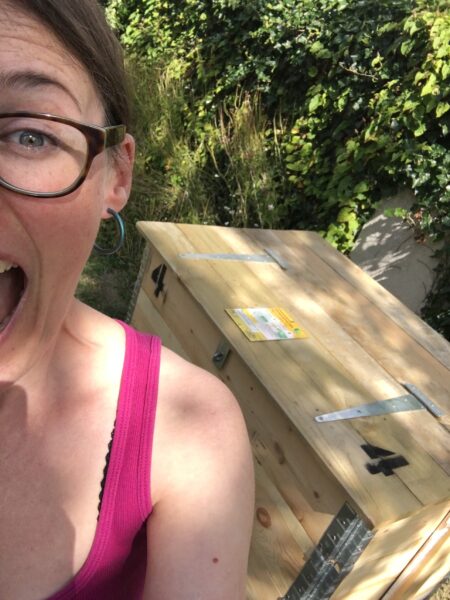 “We received a beautiful, shiny new compost box on site, allowing us an extra 20 people capacity meaning that we were able to open up our scheme again to more members” explains Svenja, “and with the return of the students to Brighton in September and October, we saw surging interest and an increase in new members.”

Similarly, St Nick’s, who received a new super-sized bin in July have begun inducting people from their wait list:

“Thanks to our lovely new bin 4 we’ve been able to induct at least five new members, some who have been on the waiting list some time, so that’s been lovely to meet and welcome new members. We’ve also had some (socially distanced, of course) compost collections and it’s been so nice to see members and have a chat and meaningful contact at a time when we’ve all been mainly at home not seeing people or familiar faces – so  good for mental health!”

Weathering and wear and tear mean there is usually a steady flow of faults for Tim to fix. But thanks to 2 years of further funding granted by Brighton & Hove City Council earlier in the year, we were able to stay on top of them, retiring and replacing old bins at seven different schemes and replacing locks and carrying out minor repairs at many others.

Despite our work on starting new schemes having to be put on hold, one scheme still managed to worm its way into existence thanks to all the groundwork having been done prior to the pandemic by local residents, our partners in BHCC and Food Partnership team member Rosie.

Against all odds, the Bedford Square community compost scheme was quietly launched this month, albeit in a very different manner to 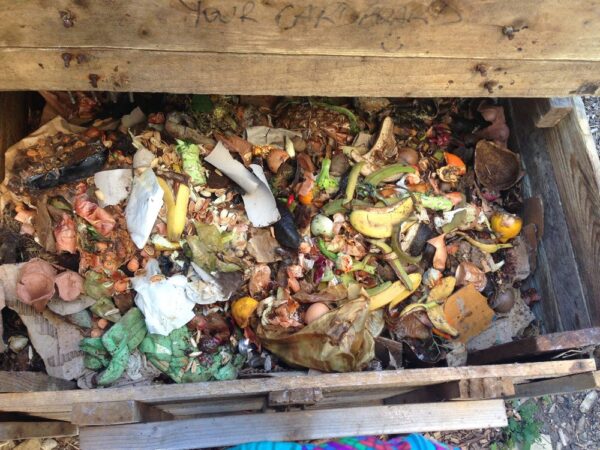 other launches. In previous times, neighbours would have gathered by the bin to sign up and receive their caddies, share refreshments, meet neighbours and get the first food scraps and worms into the bins to get the compost underway. With this being unsafe in current times, an alternate plan was hatched.

Tim installed the new bin and new monitor and chair of the Bedford Square Garden Project Peter has arranged individual non-contact collections of caddies and welcome guides for new members. Although the social element was subdued on this occasion, the result is still that almost 30 households are now composting in Bedford Square, significantly reducing the Square’s environmental impact and hopefully paving the way for friendly neighbourly encounters in the future.

Compost didn’t manage to get by totally unscathed by the pandemic – ordinarily we would have had our annual Compost Celebration, where we would invite all the monitors to come together to share some food and thank them for keeping the initiative alive. It will come as no surprise to anyone that this wasn’t possible this year. 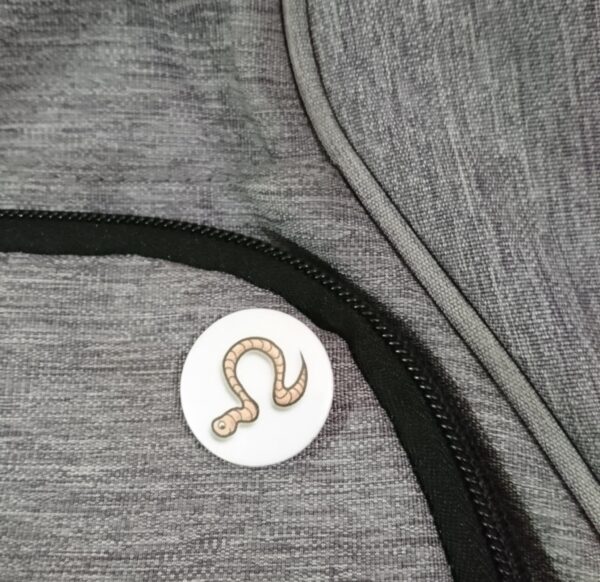 So, we improvised and sent little thank you packs to our monitors which included 2020’s hottest accessory, the worm badge. If you happen to see a worm badge on a backpack or coat around Brighton, chances are the wearer is part of an exclusive club of compost champions! It goes without saying that the 2021 celebrations will have to be doubled if the world allows.

This is a sentiment echoed by the monitors. Gabby from St Nick’s said she is “so looking forward to having a real life get together as soon as this is safe and possible!” and at Saunders Park, Dave who joined the scheme as a new monitor in February, wants to set up a members’ meetup offering a social space for like-minded people of the scheme. It’s on hold for now but stands to be implemented when it’s safe to do so, showing again how community compost schemes are more than just bins.

We set-up and support community compost schemes where you can take your raw fruit and vegetable waste, tea bags, coffee grounds, cardboard and paper.

Get composting, whether at home or at one of the many community schemes around Brighton & Hove.

Find out how to start a community compost site at a nearby park, grass verge or disused green space.