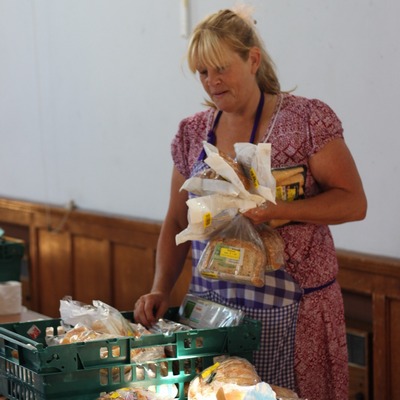 A volunteer distributing food at a food bank

Since 2014, Brighton & Hove Food Partnership has carried out an annual survey of food bank use. It is always a humbling experience to hear about the astonishing work of our city’s food banks, which now number sixteen, and are mostly run through donations and volunteers.

Every year so far, our survey has seen a slow but steady increase in food bank use, and this year is no different. Our food banks collectively distribute an average of 315 food parcels a week, up from 298 last year, to people in real need.  What our report also shows is a shift, not just in numbers, but in the types of people who seek help from food banks. A food bank ‘stereotype’ doesn’t exist, and many peoples’ stories could so easily be any one of us.

Alison (not her real name) had been married for 24 years, but when her husband left her, she lost her home, because the house they shared wasn’t in her name, and ended up rough sleeping. Because of the difficulties this led to in getting to her work on time and keeping clean, she got ill, lost her job and couldn’t find other work, finding that “because you are homeless people don’t want to know.” She since developed colon cancer but remains optimistic and has nothing but praise for the help she has had from the Purple People food bank in Portslade, who have helped her find accommodation. “They always make sure there is enough fruit and veg for me, because that is all I am eating at the moment. With the help of this food bank I am getting back on my feet.”

Debbie (her name is also changed) is a mother of four children. When her husband became paralysed following complications during a routine back operation, he had to stop working. The part-time income from her own work was not enough to live on, but it put them over the threshold for ESA benefits. When we spoke to her, she had been waiting four months to hear whether she would be eligible for alternative PIP benefits, and before the food bank’s support was having to choose between paying for food and bills. “I have nothing but praise for the food bank and volunteers. Even when they offer you a sauce or a vegetable that you wouldn’t necessarily know about, they tell you ways to cook it … I will never forget them.”

You can read more about Alison and Debbie’ stories in our blog. Our survey shows their incredibly moving situations are no longer unusual examples of food bank users:

There are many areas of concern at the Food Partnership, including the increasing use by families with children, which echoed findings from previous years, and which is troubling given the importance for future health of eating well in childhood. Also, the worrying link between mental health issues and food bank use. The main reason for food bank use locally, echoing national findings by the Trussell Trust, is ‘low income’ and this is not just about unemployment –  four out of ten food banks this year reported an increase in demand from ‘people in work.’

The issue that came through strongest this year is the increasing demand from people who are homeless or in insecure housing.  With no cooking facilities all food must be bought ready-made. Alison explained, “What they don’t understand is that when you are [street] homeless, you can’t cook, so you actually need the same amount of money as a normal person because you have to buy your food.” This is just as relevant for the increasing number of people in temporary housing, which often have very limited or no kitchen facilities.

Looking ahead, food banks are deeply worried by the arrival in a few weeks of Universal Credit which many feel will make the situation even harder for those struggling to get by in our expensive city.

Food banks are set up for short term, emergency use and they are worried about becoming part of a long-term picture. As one survey participant said “Food poverty is going to get worse and food banks may be relied on for longer periods of time than 4-8 weeks. How, as a city, can we work together to support this?”

If you or someone you know is experiencing food poverty, please see our food poverty advice.

If you want to see how Brighton & Hove is addressing these issues, download the city’s food poverty action plan in our Resources section.

Read more about Debbie and Alison’s stories in our blog or in the full Food banks and Emergency Food Network report 2017.

Food and planning – advice for developers

Advice for developers looking to incorporate food growing into their sites.