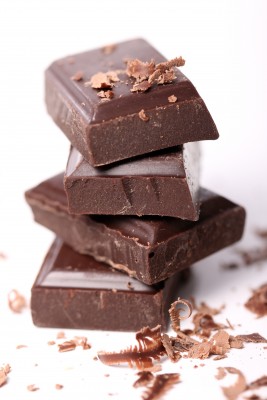 Chocolate has long been a fixation of many cultures, some even using the beans as currency. Understandably so, the rich aromatic flavour mixed with sweet sugar and cocoa butter that is delectable and give a sensation of complete satisfaction is truly worth its weight in gold.

From those humble cocoa beans there are several types of chocolate that are made today, the three most common being milk, dark and white. These are produced by altering the proportions of the key ingredients; however you can also adjust the flavour by varying how long you roast the beans during the initial stages.

Cooking with Chocolate
Many recipes like the deliciously gooey Chocolate Brownie will ask you to melt the chocolate before adding it to the mix, often leading to a less than desireable clumpy mess for the inexperienced. You can avoid this and achieve perfectly smooth runny chocolate by following these few basic rules:

If you need to use the chocolate for decorating or to make your own chocolate bunnies in moulds you will need to do a few more things to temper the chocolate.

Tempering
Tempering is necessary to bring chocolate back to its correct crystalline form once it has been melted. It is essential whenever you are using chocolate to make decorations, dipping fondant or for coating biscuits and cake. If you were to use melted chocolate straight out of the bowl without tempering you would get a product that is dull, soft and streaky.

With the warm heat that is required to melt chocolate (typically between 35oC -45oC depending on which type of chocolate you use) the crystal formations have all but disappeared.  They will reform on their own but not in the strong uniform way that makes chocolate so silky smooth. We can help the process along by adding some cooled or unmelted chocolate into the mix and then stirring vigorously to blend the two together. This is called “seeding” and helps create new crystal formations for the rest of the chocolate to bind to as it cools.

Ironically once you have completed this process the chocolate will be a bit too cool to work with and you will need to warm it up again – but not to the previous temperatures required to melt the chocolate fully, just enough to keep it workable. These holding temperatures vary , again depending on which chocolate you are working with ( 28oC for White; 30oC for Milk; and 32oC for Dark) don’t exceed these temperatures or you will lose the crystal formation and have to re-temper the chocolate.

A word on using a microwave
Microwaving your chocolate is much quicker than using the steam bowl method and uses a lot less effort, but it can be a lot easier to go wrong too, so here a a few tips:

Finally if you do overheat your chocolate, it is at risk of splitting – you may be able to avoid this by adding chunks of unmelted chocolate and stirring vigorously until it is melted. This will only work if you have not overheated the chocolate too much.