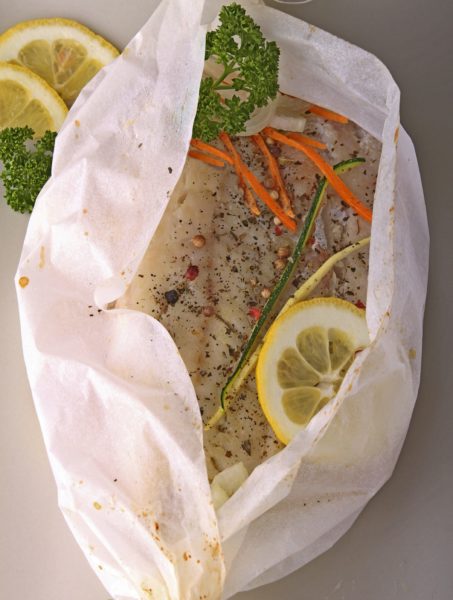 For some, cooking fish can be quite daunting, and although cooking fresh fish and is worth the time, it can also be quite complicated. However one simple and foolproof method for cooking fish is by putting it in a packet or as in French cuisine “en papillote”. Traditionally various cultures used grape leaves, banana leaves and cornhusks to encase their food with seasonings and herbs and then bake them. The steam would circulate inside infusing the food with all the flavourings inside.

If you find you are lacking a jungle by which to retrieve the necessary tools for the job, you can just as easily use parchment paper which has been treated with an acid and coated with silicone (similar to silicone baking sheet liners) to render a sturdy, burn-resistant, non-stick paper impervious to liquids.

Fish cooked en papillote will gently steam in its own juices. Aromatics, such as herbs, sliced onions, and olives, can also be enclosed in the package to flavour the fish. You may substitute the parchment for aluminium foil, but if you do so, avoid using acidic ingredients like lemons, tomatoes, and white wine, which will react with the foil and cause an unpleasant taste. It will also cook quicker. When the fish is done, the parchment will puff dramatically.

Choose the right foods: Cooking en papillote works best with tender foods that cook quickly (for example, chicken breasts instead of legs or moist, flaky fish like salmon rather than dense fish steaks). Shellfish also work well, as do vegetables with high moisture content like onions, zucchini, or bell pepper.

Mind the size: Consider the amount of time it will take for the main ingredient to cook, and cut the accompanying items into sizes that will cook in the same amount of time. If you’re preparing a tender fish fillet with potatoes, for instance, you’ll need to slice the potatoes thinly so everything will be done at once. Otherwise, you’ll end up with undercooked potatoes or overcooked fish.

Add moisture: If a food does not have a lot of moisture in it (like carrots or parsnips), add other foods with high moisture content (like spinach or tomatoes) or a splash of liquid to create steam within the packet.

Add flavour: The ingredients in the packet will bring flavours of their own, but you can also add fresh or dried herbs, salt, pepper, and other spices, and liquids like wine, broth, coconut milk, or lime juice. Also consider a knob of herbed butter or a drizzle of cream; because no fat is required to cook en papillote, a little fat goes a long way to build flavour.

A word on buying fish
According to Seafood Watch, nearly 75% of the world’s fisheries are currently overfished or are in danger of becoming so. When species are overfished or their habitats are destroyed, it can take decades for populations to recover – if at all. Choosing sustainable seafood helps avert this damaging cycle.  When planning you meal always make sure you know the fish you are buying is sustainable.

Our Community Kitchen gift vouchers are the perfect present for the food lover in your life.