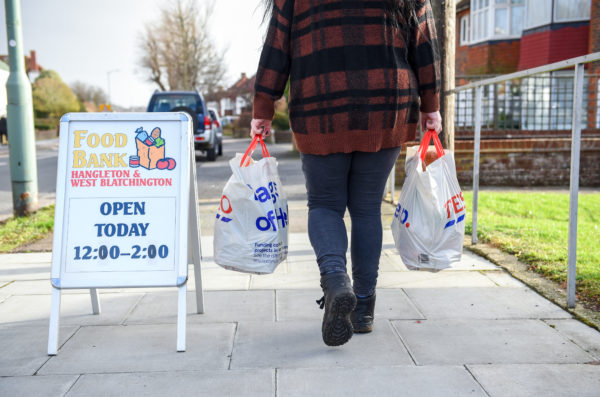 After three years of implementing its first Food Poverty Action Plan, the city of Brighton and Hove has been given a massive thumbs-up as a report assessing its progress showed an impressive 93% success rate.

The Plan was the work of more than 50 partners coordinated by Brighton & Hove Food Partnership, with funding from the Esmée Fairbairn Foundation, and it set out to tackle the city’s problems holistically, including the root causes of food poverty such as low wages. However, although it’s pleasing that such terrific progress has been made on the many actions we set out to achieve, there remains an enormous amount to be done.

More than 50,000 people in the city, or one in five, have concerns about meeting their basic living costs, including food needs – and among some groups, such as people with disabilities or people with health conditions, this is as high as one in three people. These figures have remained steady over the past four years.

Because of the difficult external climate, we think that ‘holding steady’ should be seen as success for the Food Poverty Action Plan. But it remains the case that there is a food poverty crisis in the city.

The Food Poverty Action Plan is now going to be re-integrated into ‘Spade to Spoon’, the city-wide food strategy which is currently being refreshed, again with the Food Partnership leading the work, funded by the Esmée Fairbairn Foundation and Food Power.

Bringing the Food Poverty Action Plan back into the city’s food strategy means that food poverty and food inequality will be at the heart of a new five-year action plan alongside health, the economy, community and the environment.

Among the work that we’ll be building on are the following successes:

In a statement, Kath Dalmeny, chief executive of Sustain, a national alliance advocating for better food and agriculture policies and practices, said: “I’m really impressed by how Brighton and Hove have been looking systemically at the problem of food poverty. They have been asking how they can help people with their debt, with their incomes, with their access to good food, with the supply and provision of fruit and vegetables, with opportunities to participate in community cooking. These kinds of things can help to stem the flow of problems downstream by fixing them upstream, tackling the problems at source.

“Brighton and Hove’s leadership is inspiring action around the country, informing a much wider network of cities tackling exactly the same problems. It is fantastic.”

We’re thrilled – but the work continues.

The Brighton and Hove food strategy aims to achieve a healthy, sustainable and fair food system for everyone in the city and beyond.

Community fridges are located in public, accessible places to make surplus food available to anyone who wants it.