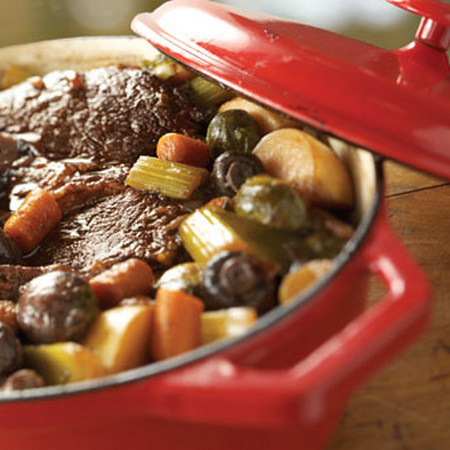 The rise of food related television shows, celebrity chefs, haute-cuisine, molecular gastronomy, food bloggers, and ‘foodies’ has created a culture that thrives on culinary excess. Often TV chefs will fool you into believing their complex recipes are really simple and you can rustle their recipe up in no time (but first you must use every piece of equipment your kitchen holds).

I am not against culinary progress and innovation – I really enjoy the Heston Blumenthal’s technical and scientific approach to cooking, but sometimes I just crave for something comforting and simple that won’t require me to move into the kitchen for the day.

Subscribing to a less-is-more approach in the kitchen can be really beneficial to your cooking – not to mention life in general. Creating a great meal does not depend upon the number of gadgets or how many ingredients you use as long as you focus on the one thing that really matters – the taste. Throwing a selection of ingredients into one pot and leaving them to meld into something full of flavour is brilliantly simple and highly satisfying.

One-pot cooking used to be the exclusive domain of bachelors, campers and students. Meals were quick, simple and washing up was a breeze. The concept was great harking back to a tradition of slow cooking that began when hunters put tough cuts of meat like wild boar or hare in makeshift vessels and cooked them for hours over wood fires, breaking down the tough fibres until the meat became tender and flavourful.

These days armed with a good heavy pot, casserole dish or slow cooker, one pot cooking can become a more sophisticated method of cooking. Whether using the oven or hobs it will transform inexpensive tough cuts of meat into deep-flavoured tender morsels accompanied by succulent vegetables and a rich sauce. In fact, the more chewy or sinewy the meat, the more flavourful the sauce will be.

But one pot cooking does not just have to be about slow cooked joints of meat. It can just as easily work for fish and vegetarian options such as chillies curries and casseroles. They may need less cooking time but as long as you cook the ingredients together low and slow you will get those wonderful flavour infusions that make one pot cooking so delicious.

Here are some recipe ideas from the BBC website.