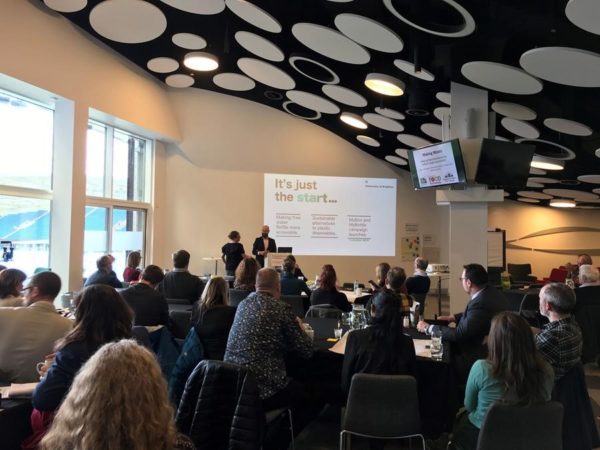 Leaders from Brighton and Hove food businesses came together at The Amex Community Stadium yesterday (Wednesday, 3 April 2019) to kick about ideas aimed at ditching single-use plastics. The goal: a city free of the plastic straws, water bottles, takeaway cups, plastic food packaging and other ‘disposable’ items that litter our streets, parks, shoreline and sea.

A ‘Brighton Cup’ – a reusable cup available across multiple venues in the city for a deposit – was one proposal gaining support from many of the food-serving businesses at the event.

Around 160 million tonnes of new single-use plastic is produced every year – with each item made from it potentially lasting over 500 years. A third of fish surveyed on the South Coast in 2016 was found to contain plastic. 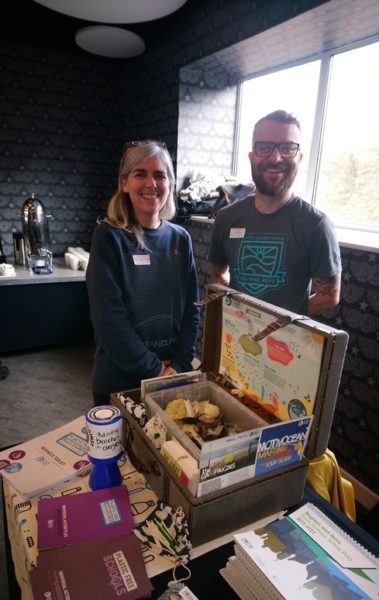 Wednesday’s event, Making Waves: helping food businesses to reduce single-use plastics, was organised by Brighton & Hove Food Partnership with Brighton and Hove City Council. It was designed to be a censure-free event for all food businesses in the city, from large to small and regardless of where they have reached on the journey to being plastic free.

Among the 80+ businesses attending were representatives from Brighton & Hove Albion FC, local restaurants and cafes, schools and universities, hospitals, retailers, venues and workplaces, as well as neighbouring councils.

They heard from those ‘leading by doing’, including Vikki Chapman of Festival Republic, who spoke on the reusable cup scheme at Latitude music festival, and David Hicks of the University of Brighton, who shared his experiences of the MyCup ‘bring your own’ initiative.

“It was fabulous to see the enthusiasm at this event – and in particular businesses really running with the idea of a reusable ‘Brighton Cup’. Such an initiative has been suggested by environmental campaigners before but to get business buy-in is key – and this event went a long way towards achieving it!

“Hundreds of thousands of plastic disposable cups are used at festivals, music venues and sports stadiums on a weekend across the city so this seems like a massive opportunity to embrace and now take forward. It really underscores the message that focusing on reusables has to be the way forward. Compostable packaging is not always the answer.”

“The aim  of this event was to provide useful information and inspiration for businesses, not a place to criticise what businesses currently do or don’t do. There isn’t a one-size-fits-all solution for all, but there are a few key things that most businesses can do to make a significant difference by following the waste mantra: Remove and Reduce, Promote Reuse, and Recycle.”

“Reducing single-use plastics is key to ensuring a sustainable future and a key plank of The Living Coast UNESCO Biosphere programme. Making Waves turned out to be a fabulously positive demonstration of how willing local business people are to embrace change to create a better city to live and work in. Brighton was the first UK city to receive a silver Sustainable Food Cities award and this event was a big step forward in our bid to be the first to achieve the gold.”

“We were very pleased to be a key part of this event. We continue to examine every part of our business to make sure we’re doing our bit to make our fans proud of us – and that includes working hard to find solutions to ditching the plastic.

“We have already made steps to reduce single-use plastics at the stadium, replacing plastic stirrers and cutlery with wooden alternatives, removing drinking straws and switching to biodegradable options at our stadium and training ground. Our aim is to work with our various suppliers to reduce this further with an aim of eventually removing all single-use plastic.”

Making Waves was sponsored by Sodexo Prestige, catering partner of Brighton & Hove Albion FC at the Amex, which has already banned single-use plastic straws from its stadium.

Join in the conversation on social media around plastics and other key issues using #GoldFoodCityBid
< So what do we do about malnutrition? – a learning visitOur #GoldFoodCityBid goes global! >