Ditch the plastic in July raises issues for FP team 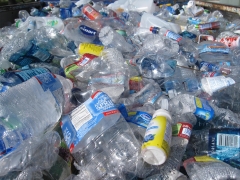 For the past month some of the staff at the Food Partnership have been taking part in Plastic Free July aimed at cutting down the use of plastic single-use packaging.  The campaign is being followed by over 1 million people across the world trying to make a difference and raise awareness of the problem of how plastic does not  breakdown, litters both earth and sea and increases our eco-footprint.

Here are our team’s thoughts on trying to give up plastic in their daily lives.

“The biggest change I’ve made is not buying salad, vegetables, or fruit in plastic packaging. It has meant I’ve had to think about alternative places to find the products, minus plastic. I signed up to a veg box scheme which does the trick. I also found some local shops sell loose fruit and veg and took my own produce bags. I stopped buying hummus and dips, and made my own instead.

“The biggest barrier to reducing plastic has been fish. I stopped buying fresh fish wrapped in plastic and asked Waitrose to put my counter fish in my own container, but they refused. Canned fish is always an alternative, but the choice is limited so I’m still looking for a local fish supplier who will put the fish in my own container.

“I’ve had a KeepCup for a while now, but recently bought a new one which keeps drinks hot or cold – the plan is to continue using it for coffee, but also to take it to the beach bars and ask them to put a beer in there instead of in a single use plastic cup – hopefully they’ll agree.”

Harvest Project Support Sarah Davenport said; “I’ve been generally more conscious of how much plastic is around. I’ve refilled my shampoo at HiSBE and bought shampoo from Lush (they let you return containers). The most difficult thing for me is to work out what’s more ethical, shopping in supermarkets like HiSBE for cheese, meat and fish are sustainably sourced but pre-wrapped in plastic or go to fishmongers and butchers who do not source sustainably or supermarkets who leak money out of local economy and get it in a re-useable box?

“Plastic. Everything is bloody wrapped in the stuff. Supermarkets are particularly bad, even wrapping bananas which already have a wrapping.

“In Greece when I went to the markets they scooped yoghurt out of a vat and into a tub, as well as the olives, cheese was sold in waxed paper or re-useable boxes and cut in-front of you, as was the fish and meat, grains were sold by weight in paper bags, and none of the fruit was ever in plastic. Even in the markets here the cheese and yoghurt is individually pre-wrapped. We’re plastic mad.”

Project manager Emily O’Brien said; “I thought about going plastic-free but was scuppered on day one, with a trip to Morrison’s to shop for a barbecue. Everything was in plastic. Everything. Even the stuff from the fish counter was plastic packaged for me.

“But I do have a lot of veg growing completely plastic free, and have been bringing them in for my plastic free colleagues to prevent them starving. And although I have been a fail (I have probably cut down by maybe 10 %?) it has certainly made me more aware. “

Communications manager Caroline Sutton said: “This campaign started just as we received our new wheelie bins for recycling and realised we’d probably been putting plastic into our black boxes which the council do not recycle. Now we have to bin so much more and it’s shocking how much plastic we throw away.

“I’ve discovered I’m very entrenched in my habits and just grab packets from the supermarket shelves as I don’t want to waste time. I buy meat and fish at the end of aisle shelves which are cheaper but all in plastic trays and I don’t hang around to count out individual apples etc. preferring to grab the ones in a bag. I do try to reuse plastic bags for sandwich bags for packed lunches though.

“My biggest change has been to be more thoughtful around lunchtime. I’ve either packed my own when I can or buy from a shop where they provide a salad in a recyclable box. But they do cost more. My husband has recently made jam and bread at home which helps too. I’m aiming to make some more cakes and biscuits at home rather than buy them.”

Family and Schools dietitian Jess English said; “The biggest change I’ve made this month is going to HisBe’s for dry-store ingredients like pasta, lentils etc so they’re not wrapped in plastic. I plan my weekly meals and shopping anyway but this involves a fair bit of extra planning and would be pretty difficult outside of Brighton.

“The biggest barrier to being plastic-free I’ve found are loo roll, coffee, yoghurt (going to try to make my own …hopefully won’t die).  Also frozen veggies and fruit – this could hinder fruit and veg intake for people who can’t afford to buy fresh stuff or bulk and freeze down.”

Project Support Worker Anne-Marie Bur said; “The biggest change I’ve made is I nearly always use my metal water bottle instead of buying water in plastic bottles. My challenge is how to carry on eating fragile fruits and veg like cherry tomatoes and blueberries that only come in non-recyclable plastic containers.”

Project manager Chloe Clarke said; “I’ve been aiming for a Plastic Free July, but am failing miserably…but the one thing it has done is really opened my eyes to actually how much plastic stuff is in my life – it’s everywhere.

“Instead of being plastic free, I’ve opted for more achievable goals of using a metal water bottle, refusing straws, taking my own shopping bags and generally trying to get my kids to realise that plastic stuff is bad.

“Because I’m a busy working mum I currently rely on getting an online supermarket delivery which is basically all plastic…the supermarket tries to put some produce in cardboard containers now but these are then wrapped in cellophane; bottles of washing up liquid, shampoo, razors etc….then although I’ve requested no carrier bags, the supermarket still wraps the frozen / replacement products / going out of date products in plastic bags anyway. If I had the time, I’d shop at my local greengrocer,butcher, fishmonger and bakery; fill up my washing up liquid in the health food shop down the road etc. etc…. if only. “

Find out how to tackle food waste in your business to save money and reduce your impact on the environment.

Community fridges are located in public, accessible places to make surplus food available to anyone who wants it.